Skip to content
Many goalies have asked me specific questions about the 1S and the 1X lines by Bauer Goalie and my answers are below. Lucky for you, I’ve spent a lot of time in this gear and have a lot of free-time. 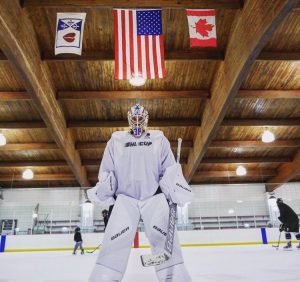 “If you loved the 1S gear so much, why’d you switch?”
To be completely honest, I was not planning on switching to the Vapor line and didn’t even plan to order a set because I was so happy with the 1S, especially after winning another BHL championship tee (post-game press-conference photo below) so I didn’t think it made sense to switch. 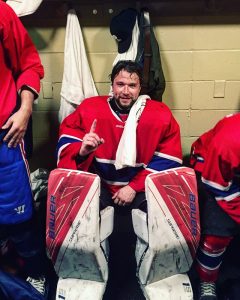 But my friends at Bauer Goalie know me too well and convinced me to take the NEW Vapor 1X gear out for a test-drive. Okay, there was actually no “convincing” needed, because the gear looks SICK. They knew I’d fall in love with them but they also strongly suggested that a Medium pad would fit me better than the Large pad I was currently wearing in the 1S. Of course, I was very excited to try out the new gear, but I must admit I was skeptical about downsizing my pads. I’m 6’0 (but if a scout asks, say I’m 6’2) and have been wearing 34+3″ and/or 35+2-2.5″ for the entirety of my illustrious BHL career. These Medium 1X pads fit more like a 34+2, so I was basically going down 2 whole inches.
“Was switching to shorter pads the right decision?”

Look, I’m not a huge fan of admitting when I’m wrong but, Bauer Goalie was spot-on about me being better off in a Medium. The shorter pads only helped my mobility and didn’t hinder my ability to close up my five-hole one bit like I worried. In fact, it HELPED! Hindsight is always 20/20, but like many goalies, I’ve been wearing as tall of pads as I could because I always thought that it would benefit me by taking up more net and ceiling my five-hole while in the butterfly. I also thought the overlapping was a good thing.. like a reliable back-up goalie. However, it was hindering my mobility without me even realizing it because the tops of those pads would often overlap or rub against one another, which can cause friction at times while moving around in the crease. No matter how silky or talented I am on my edges, the overlap just isn’t necessary. It slows things down more than I realized. Now, we’re only talking about fractions of a second here but in the NHL, or even the BHL, a fraction of a second is often the difference between a goal and a save. So if you’re one of those goalies who’s wearing really tall pads (there are a million of you) I highly recommend downsizing. It will help your game. Clearly the folks at Bauer know what they’re talking about.
“What are the similarities between the 1S and the 1X leg pads?”
Well, they’re both OD1N pads, so they have a lot of the same modern features, like an insanely lightweight foam construction that makes rebounds less dangerous by sling-shotting them away, a simplistic strapping system that makes putting them on as easy as kindergarten was (I dominated Kindergarten) and last but certainly not least, HOW THE OD1N’s SLIDE! The first time a goalie wears an OD1N pad, it’s going to feel different because it is different. You’re going to feel like your legs got three times as strong because all of sudden sliding became as easy as counting to three (okay, maybe just for me, but the difference is amazing) As previously mentioned, the strapping is different because they’re stretchy and Velcro, which means you’re going to wear them a lot more snug than you would with the old leather straps. It took me just one week (which is only one BHL game) to get used to all of the aforementioned. Even though they’re different, the differences are amazing and pretty easy to adjust to. It’s like dating a 6 and all of a sudden you’re dating a perfect 10… You had no idea you were dating a 6 until you met the 10 and you got to know each other. Sure it seems like it would be a lot different, and it is, but it’s different in an awesome way, so the adjustment is easy.
“What’s the difference between the 1X and the 1S leg pads?”
Well, I already told you that the 1X Medium fits me better than the 1S Large, so aside from that, the boot on the 1X pad has a slightly larger crease in the foam, which allows for more flex than the 1S. Speaking of foam, the 1X foam does seem slightly stiffer to me (or maybe it’s the outside material that’s a little harder, or a combination) It also seems like the 1X pad is just barely heavier than the 1S. I also noticed that the top of my 1X pad is a bit stiffer and slightly narrower than the top of my 1S pad, which I like. I also noticed the knee stack is slightly angled on the 1X, which I find helps me get my knees tight, especially on re-directions or rebounds where I’m reacting/recovering from a previous shot/save. 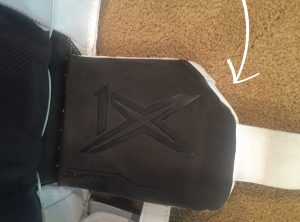 Lastly, I noticed the strapping was different on each pad. Same innovative straps but different placement. I know a lot of goalies that prefer one versus the other but for me I like the way the vapor pads strap. It’s a bit more of a simplistic approach in my opinion and I find that more convenient for me. It allows me to put my pads on just a little bit quicker so I have more time for stretching and wind-sprints.
“What’s the difference between the blockers?”
The 1X has binding and the 1S doesn’t. And the 1X blocker seems thicker. Also, the 1X material is different… it’s like futuristic and awesome. I’m sure there are additional features that you can find on Bauer’s site.
“What’s the difference between the (catch)gloves?”
In my opinion, the 1S glove has more of a modern break. I know this is something many goalies like, but I like a glove that has a more traditional feel. Maybe it’s an American thing, but more traditional breaks kind of remind me of a baseball glove. So in my opinion, the 1X gives me that traditional feel with all the new features, innovation and comfort that the 1S also provides. And I do like that pointy cuff on the 1X.. and putting it on feels like you’re putting your hand inside the fluffiest cloud you’ve ever seen. 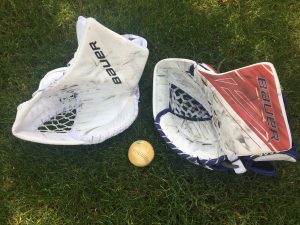 “Can I have your old pads?”